RAIN AND A BLT PIZZA 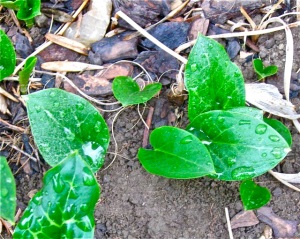 I woke early this morning to the sound of rain plopping on the hosta lilies taking shape in the bed outside my window.  Last week I’d talked to my neighbor about whether we should be thinking about turning sprinkler systems on what would be easily a couple of months earlier than last year.  That may give you an idea of how wet last year was compared to how dry this one has been.  My concern was not for the lawn; I was getting worried about my birds.

Last fall, literally hours before the first of a nearly endless chain of wind storms that would grind on us all winter, I’d had all my trees trimmed.  They’re huge, and were in dire need of some serious work.  The massive maple in front was overhanging the house; two ash trees formed a low arch over the driveway, and I’d have to duck beneath leaf-laden branches; one of the ashes in back furnished lovely shade for my neighbor’s deck, but also threatened to beat it right off the back of the house; another ash had its sights set on the garage roof.  Last winter was the windiest I’ve experienced anywhere, and for months my mantra was:  Thank God I had the trees trimmed.

When I arrived home just as the trimmer and his crew were finishing the cleanup, which probably took longer than the original trimming, I was anxious about the nests I knew were there.  I love trees in winter, bare of leaves, when otherwise hidden nests are visible.  The ash trees in back held nests where sparrows and finches has raised families.  When the fledglings were capable of flying and learning to feed themselves, parents would bring them down to feeders all around the yard and stuff seed into their gaping, shrieking yaps until little light bulbs went on and they figured it out.  The maple had been home to my 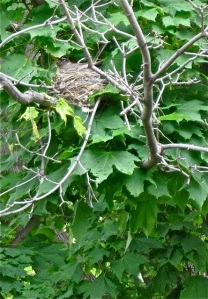 robin.  I still marvel at the engineering of her nest.  Its

base and exterior walls consist of twigs and evergreen needles and assorted flotsam woven into mud as solid as cement.  On the bottom, the mud curved over the branch on which it sat to anchor it in place.

When the trees were trimmed, they still bore leaves.  I anxiously peered into the now somewhat visible reaches and asked the trimmer if he had saved “my” nests.  “Oh 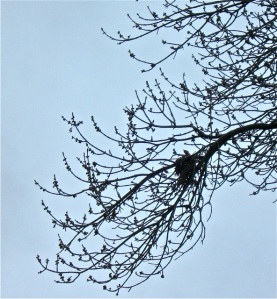 yeah,” he answered, waving a hand vaguely in the air, “you’ve got some left.”  The man may know his trees, but shortly thereafter when all the leaves had been blasted away, it became apparent that his and my definitions of “some” could not be more different.  Note to self:  the next time trees are trimmed, negotiate nests before the first chainsaw is fired.

So, grateful as I was that the trees had been seen to, I’d lost one of winter’s pleasures:  relief as the nest inventory weathered winds and heavy snows.  When bitter winter winds yielded to warmer spring ones, with precious little 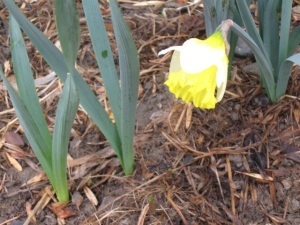 precipitation in any form, I began to worry about my birds.  They needed mud to begin building new nests, and hopefully reinforcing the one left from trimming.  Hence the conversation about turning on the sprinklers early.  But when I woke up early this morning, my first thought was:  mud! 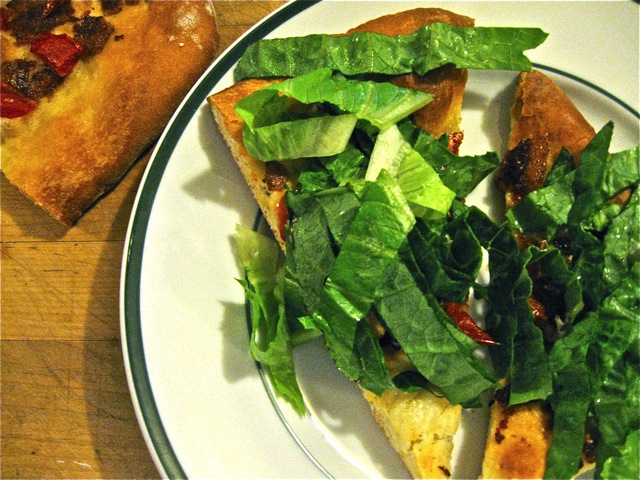 Last night was pizza night.  I’d made my dough that morning using my standard favorite recipe, and by dinner time it had risen perfectly.  I turned it out of the bowl and divided it in half.  One half would be dinner, and the other was wrapped and refrigerated to be turned into a calzone for Meatless Monday dinner on, obviously, Monday.

On a floured board, I pressed the dough out into a circle about 6 or 7 inches in diameter, dropped the piece of plastic over it (the one that had covered the bowl), and preheated the oven to 350 degrees.  I put my pizza stone in the oven at the same time.  I arranged 6 slices of bacon on a baking sheet, and when the oven was hot, slid them in.  Cooking bacon in the oven saves a serious clean-up on your stove top.  I only baked the bacon about halfway (10 minutes) because I didn’t want it to get overcooked on the pizza.  When it came out of the oven, I left it set at 350 degrees.

While the bacon cooled enough that I could handle it, I diced 2 tomatoes in 1/2″ dice.  Now that the pizza dough had rested (it’s actually the gluten that needs to rest), I could press it the rest of the way with the greatest of ease.  I wanted it about 13″ in diameter, and very thin – a little less than 1/4″.  Finally, I cut the bacon into 1/2″ pieces.

I sprinkled my peel (if you don’t have one, use the back of a baking sheet) generously with polenta – corn meal or semolina will work well, too.  I set the pizza dough on the peel and brushed it lightly with a couple of tablespoons of olive oil.  The bacon was scattered about next, followed by the tomatoes.  Next, I slid the pizza onto the stone – the polenta or cornmeal or semolina act like little, tiny ball bearings – and set a timer for 15 minutes.

While the pizza baked, I washed 3 large leaves of romaine, dried them with a towel, and sliced them very, very thinly across the middle.

A note here about the baking time:  typically, pizza is baked at much higher temperatures.  I wanted this one, though, to be very, very tender, and for the bacon and tomatoes to be just the right doneness.  The bacon needed to be crisp, and the tomatoes just caramelized on their tips.  After 15 minutes, the crust wasn’t quite as brown, nor the tomatoes caramelized, so I gave it another 5 minutes.  It was perfect.

After I removed the pizza from the oven, I let it sit for 5 minutes.  I wanted it still warm, 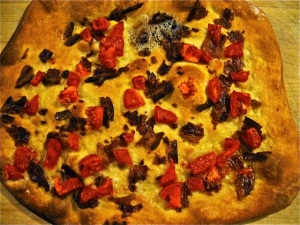 certainly, but I didn’t want the lettuce to wilt when it was dropped over the top.  Since a 12″ pizza is more than I can eat by myself, I first cut the pizza in half, then one half into three generous  slices.  Then I dropped handfuls of lettuce shreds over the tops.

My friends, it may be the best pizza I have ever had.  The crust was tender, the bacon crisp, the tomatoes riotously flavorful, and the lettuce crunchy.  I savored each and every bite.  I still have a whole half left for lunch today, rain was forecast for overnight, and life was very, very good.  I have high hopes for my trees. 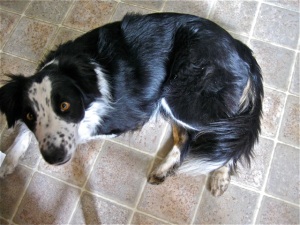 I'm a chef, a cook, a teacher, a reader, a writer, a bike-rider, a dog- and cat-woman
View all posts by thesolitarycook →
This entry was posted in Breads & Pizzas, Entrées, RECIPES, STORIES and tagged birds' nests, mud, pizza, spring, trees, wind. Bookmark the permalink.

12 Responses to RAIN AND A BLT PIZZA