WHEN LIFE GIVES YOU LEMONADE

Sometimes life lobs lemons at you, and other times it not only makes the lemonade, but also hands you a great, tall, frosty glass of it with a sprig of fresh mint tucked in among the ice cubes.  That’s what happened this past weekend.

I was staying out at the beautiful Shane Creek Bison Ranch.  I had feeding instructions for all the animals – bison, horses, chickens – but Dot had warned me that I might not see the bison herd at all.  Some of the cows are still calving, and she explained that they become extremely reclusive during that time.  Others have very young calves, and don’t always want them to be seen until they’re a couple of weeks old.  One recent weekend when I was out visiting, the only sign that the herd had come down for grain was that it was all gone from the troughs; she’d neither seen nor heard them come and go.

So my expectations were minimal at best when I set off towards the feeding stations early in the morning with all 3 dogs.  As I rounded the bend in the road at the end of the house, though, I thought I spied some large, brown shapes through the trees.  When I crested the rise, there was the herd, well most of it, patiently waiting for breakfast.  I paused for a moment to just take them all in, and also to let them observe that I wasn’t Dot.  I moved on slowly, hoping that my non-Dot-ness wouldn’t cause them to take off.  And it didn’t!  They could see that I was advancing on the grain buckets, and I guess that made me golden in their eyes.

I filled them, making my usual mess, which I scooped back into the buckets.  Wild turkeys and deer will clean up the leavings, but neither is exactly encouraged to come around for handouts.  One morning when I phoned out to the ranch, Rick answered and asked me to hold on a minute; Dot was outside chasing the turkeys out of the yard.  I had a Dr. Phil moment, thinking, “How’s that workin’ for ya?”

There was nothing but a wire fence, albeit an electrified one,  between me and the herd, but at the same time, I realized I felt little apprehension about being so close to very large animals.  Some of whom had very small babies.  Nor, evidently, did they.  Elvis, the patriarch, was first in line at the first trough, as I suppose is fitting.  I wanted to pause and marvel at being the closest I’d ever been to him, but his head was already in the trough.  Waiting.

There is clearly a hierarchy within the herd.  The cows, several with calves right behind them, arranged themselves along the troughs and waited for me to come to them.  No jostling, well not much, no nudging someone out of the way, and no gobbling before it all disappeared.  One cow was late to the party, and came moving quickly down the hill.  Her calf came on before her, and I swear it  hopped gleefully down like a bunny.  I was literally open-mouthed at what I was getting to see.  Days don’t get a better start than that.

I put the feed buckets away, grabbed my camera and started taking photos.  Elvis will practically pose in a perfect profile so that his magnificence may be fully appreciated.    But the cows who were happy to have me near their calves as long as I had a grain scoop in my hand, quietly turned and put themselves between me and the little ones when I tried to take photos.  I’m not going to get pushy around an animal who has a set of sharp horns and isn’t afraid to use them, fence or no fence.  So I simply stood back and let the video roll up in my mind.  Even the dogs maintained a respectful distance and demeanor.

As they began to finish eating, the cows and calves turned and ambled back up the hill.  A couple of them stayed to tank up on water.  Elvis waited patiently until they, too, turned uphill, and he closed the end of the line.

And they were gone.  Later in the morning, we (the dogs and I) took a hike up to a spot where looking in one direction there is a perfect view of the Beartooth Mountains, and looking in the opposite, a view of the Crazy Mountains (though that day they were socked in by an advancing storm).  It’s a good high vantage point to see an extensive portion of the acreage.  Not an animal in sight.  I’ve marveled with Dot and Rick how such large animals can utterly vanish.  Even they don’t know where the herd goes when they’re secretly calving, and they’re content to leave it that way.

But after seeing the bison off, we still had chores to do:  carrots, grain, and hay for Smoky and Blue, the achingly beautiful horses.  Good boys that they are, they both went right to their feeding stations the moment they saw us.  Carrots and grain go into their buckets, while flakes of hay are tossed out on

the ground.  The OCD in me wants to know how many whats are in a flake, but the more reasonable side understands that close enough is probably good enough.  Blue grabs a flake in his teeth and tosses it out in front of him so as to spread it out, then starts working his way along its path.  Smoky, on the other hand, buries his soft muzzle in one and chews his way meditatively through it.  And they don’t eat it all at once.  When we were coming back from our hike later in the morning, both were back finishing up the last. 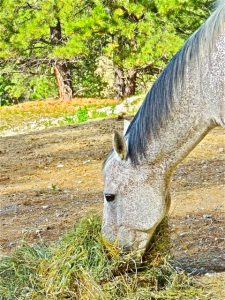 It was finally time for my breakfast.  Dot had also warned me that the chickens are of an age that they aren’t producing eggs much any more.  Their principal job is to perform pest control, so eggs are but a nice bonus.  Nonetheless, the previous evening when we’d been feeding the horses and checking on the chickens, I found 3 beautiful eggs nestled in the shavings.  Gold wouldn’t be as sweet to discover.  I gently scrambled two of the yolky beauties for my own breakfast.

When life hands me a glass of sweet, fresh lemonade, I say thank you.  Thank you so much.

I'm a chef, a cook, a teacher, a reader, a writer, a bike-rider, a dog- and cat-woman
View all posts by thesolitarycook →
This entry was posted in STORIES. Bookmark the permalink.

15 Responses to WHEN LIFE GIVES YOU LEMONADE