Posted on September 10, 2013 by thesolitarycook

The sun may be setting on summer, but with temperatures still in the 80s, I’m not yet in the mood for hearty, day-long simmerings of this and that.  Here is a soup that incorporates the last of one of summer’s great treasures, pairs it with beautiful black beans, and layers in just enough spicy warmth to make it all interesting.

When you arrive at the instruction below to first make corn stock, please don’t scream WTF?! at me.  If you set it up in a slow cooker to simmer during the day while you’re elsewhere, by the time you’re back home and ready to put together a very quick dinner, the stock will be ready and waiting.  The soup itself comes together in about 20 minutes.  Even better, you’ll have enough of stock that you can save and freeze some for another time when speed is of the essence.

Husks and cobs from 4 ears of corn

So.  First make the corn stock.  It is going to sweeten your soup immeasurably in ways that vegetable or chicken stock can only dream of, and you’re going to need that sweetness to balance the peppers’ notes.

Tiny Tepin chiles (here is an excellent chile reference guide that would be good to bookmark) have an intense heat, but it is short-lived.  Japones chiles pack more of a punch, so use fewer if that is what you have. 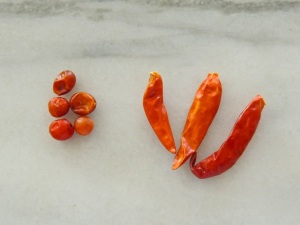 Tepin chiles are on the left, and Japones on the right

The chiles are going to deepen the flavor of your stock with a warmth that will be very different from layering them in on the soup end of things.

I stripped the husks (keeping only the clean ones) and removed the kernels the night before, then refrigerated everything.  An easy way to remove the kernels without them flying all over the kitchen is to lay the ear flat on its side on a cutting board.  Use a knife to slice off a facet of kernels.  Turn the ear, repeat until all kernels have been sliced off.

That done, in the morning, all I needed to do was toss everything in the slow cooker and be on my way.  Transfer the husks and cobs to the slow cooker, and add the warm (not hot) water so that it heats up faster (well, as fast as a slow cooker can heat anything up), and set the temperature to High while you get ready to leave.  Before you go, reduce heat to low.

All of the corn kernels

1 can black beans, rinsed and drained 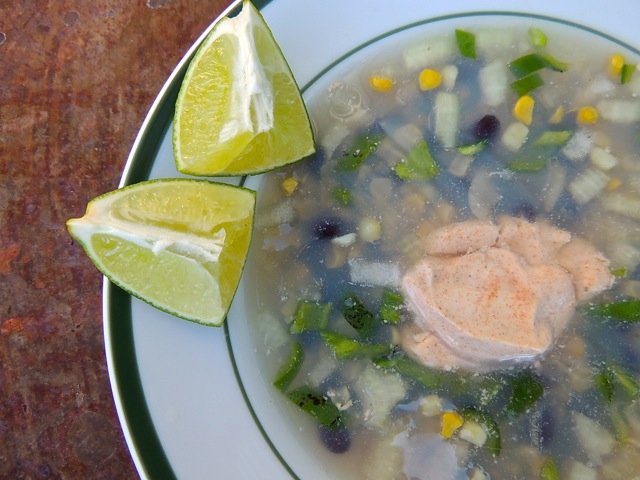 Serve with wedges of lime.  Summer isn’t gone yet.

I'm a chef, a cook, a teacher, a reader, a writer, a bike-rider, a dog- and cat-woman
View all posts by thesolitarycook →
This entry was posted in Meatless Monday, RECIPES, Soups, Vegetarian, WEEKNIGHT DINNER and tagged black bean soup, corn soup, roasted peppers, salting onions. Bookmark the permalink.