Posted on January 26, 2014 by thesolitarycook 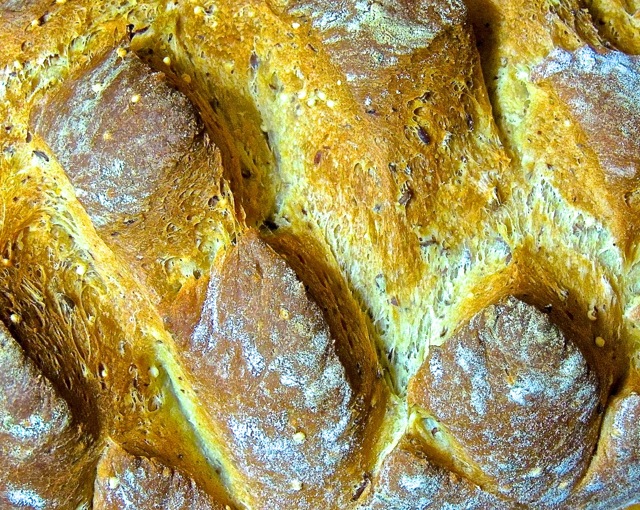 When I first began making an iteration of this bread years ago, my sister felt I’d finally taken a serious birdwatching habit a step too far.  I’ll admit, the idea did come to me as I was filling feeders one morning.  Outside my restaurant, I had several of them distributed under the eaves overhanging a long set of dining room windows that looked over a creek.  Bird life was abundant, and when the room was quiet, we could hear the crunch of seeds as goldfinches, junkos, and pine siskins lunched alongside us. I came to wonder if tiny, golden globes of millet (from the bulk bins of a natural foods store, not the bucket of bird seed, just so you know) would lend a similar, satisfying crunch to bread.  And so it does. 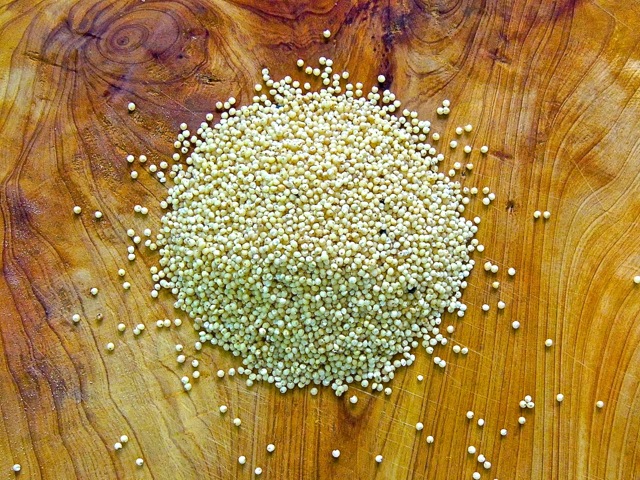 GOLD NUGGET BREAD 6 3/4 cups bread flour 1/4 cup uncooked millet 1/4 cup ground flax seed (because your body absorbs its many nutrients better when it is ground) 2 tablespoons whole flax seed (lovely, and its texture so satisfying) 1 tablespoon active dry yeast (or 1.5 teaspoons instant) 2 teaspoons sea or kosher salt 10 ounces hot tap water 10 ounces milk 1 large egg 2 tablespoons honey 2 ounces neutral oil (I like corn oil) for the dough, plus a tablespoon for oiling the bowl 1.  Measure the flour, millet, ground and whole flax seeds, yeast and salt into the bowl of a stand mixer.  Swish the dough hook through everything to disperse the yeast. 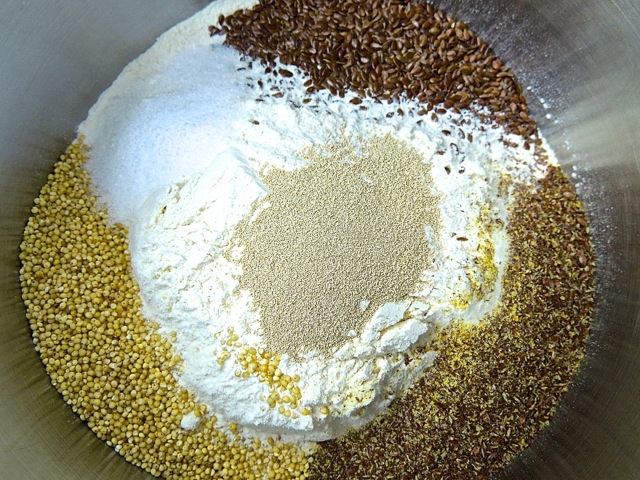 2.  Run 10 ounces of hot tap water into a measuring cup.  Add 10 ounces of milk (whole, if you have it; if not, please not less than 2%).  The temperatures will meet in the middle at warm.  Pour the mixture into the bowl.  Add the eggs, honey, and oil.  Using the dough hook, mix on lowest speed until the dough comes together.  Within 6 to 7 minutes, it should appear cohesive and begin to leave the sides and bottom of the bowl.

3.  Don’t worry if it doesn’t do so completely.  You’ll be tempted to begin heaving flour into the bowl.  Don’t.  You’re going to give the dough a rest period known as an autolyse.  Briefly, it permits gluten strands and starches in the dough to take up moisture and expand outside the stress of kneading.  Turn off the mixer.  Drape a piece of plastic around the top of the bowl, and let it sit for 20 minutes. 4.  At the end of the autolyse, remove the plastic (hang onto it), turn the mixer back on.  You may be amazed to see what different mass your dough is.  Give it a few rotations of the hook, and lo and behold, the dough will come together tightly around it, leaving the sides and bottom of the bowl clear.

Let it knead  for 5 minutes.  After that time, turn off the mixer and pull off a walnut-sized piece of dough.  Round it up quickly between your palms, and stretch it into a windowpane over the tips of your fingers.  The thinness/strength of the windowpane tells you if you have adequately developed, through kneading and the autolyse, the gluten in the dough.  Gluten is the protein which quite literally holds bread up.

If your windowpane breaks or tears, toss the knob of dough back into the bowl, and knead for a couple of minutes more.  Repeat the windowpane test. 5.  Once you’ve achieved a good, strong windowpane, turn the dough out of the bowl and pour a tablespoon of oil into it.  Use a paper towel to spread it around the sides and bottom.  Don’t worry about a few specks of dough.  Return the dough to the bowl and press it into place.  Turn it over once, and press it down again.   Cover it with your sheet of plastic.  Use a piece of masking tape on the outside of the bowl to mark the dough’s level so that as it rises, you can see when it actually has doubled rather than guessing.  Or hoping. 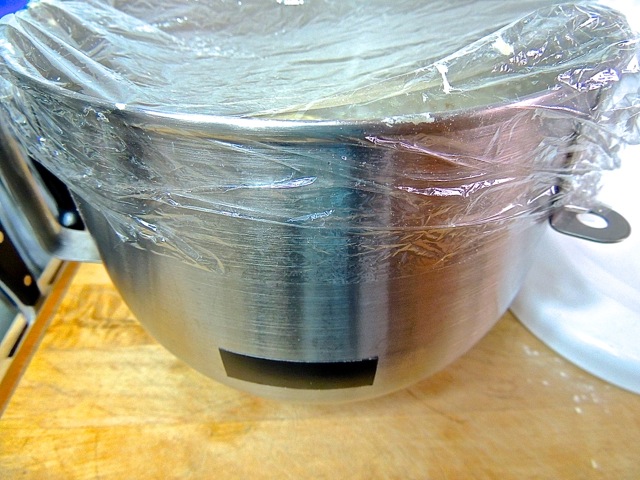 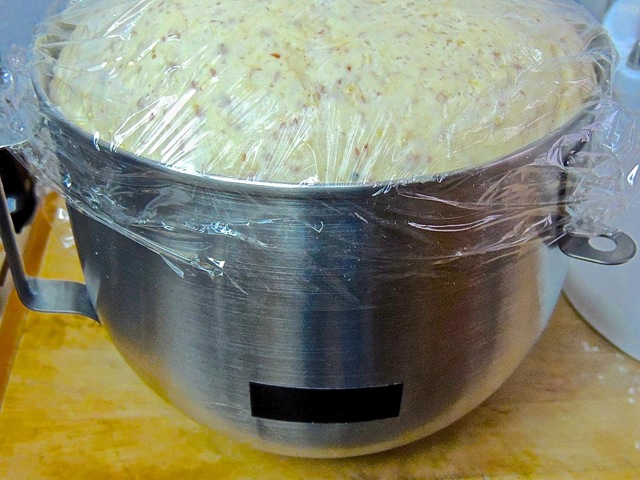 6.  Once the dough has doubled, turn it out onto a work surface that you’ve lightly dusted with flour.  A bench scraper is perfect for dividing the dough in half. 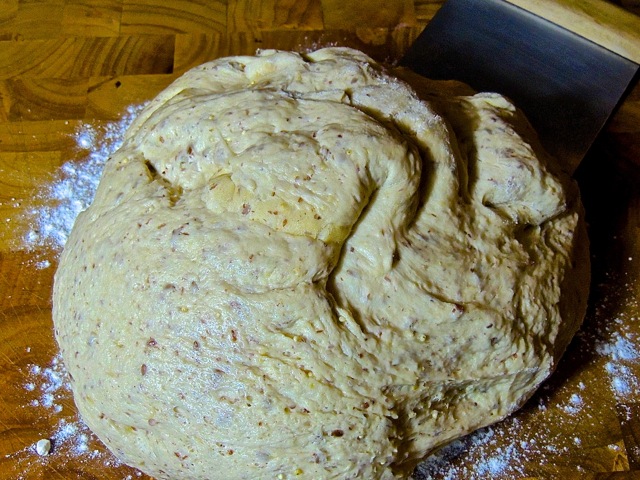 Shape it as you wish:  into a conventional loaf pan (lightly oil the pan before dropping the dough into it), or as a hearth loaf.  I generally prefer the latter simply because I find them so pretty.

Line a baking sheet with parchment, and set the loaves on it.  Dust their tops lightly with flour, and drape your sheet of plastic over the top.  Let them rise at room temperature until they have doubled in size, about 45 minutes.  The second rise goes much faster than the first because of the yeast population that you have built up. 7.  While the dough is rising, preheat your oven to 375º.  When the dough is ready, remove the plastic (which you can likely fold up and re-use).  Use a serrated knife to carve some decorative slashes in the top.  The slashes should be a good 1/2 inch deep.  The purpose for slashing the bread is two-fold:  it gives the dough a direction in which to expand – and if you don’t slash it, it will still expand, but in a direction it chooses, and you probably won’t like it – and it looks beautiful. 8.  Place the pan in the oven.  The total baking time will be about 45 minutes.  Set a timer, and rotate it at the halfway point. 9.  When done, remove the sheet from the oven and set the loaves on racks to cool.

I can never wait until a loaf is absolutely, completely cool before cutting into it, so I don’t expect you to, either.  Try, though, to let it lose some of its heat before you have at it.  Otherwise, all you’ll taste is the heat, not the bread.  Or its crunch.

I used to religiously watch televised awards shows with a friend.  Emmys, Globes, Academys, even the CMAs, though I’ve got to tell you that one was hard.   But a couple of years ago, I began to wonder:  why?  One evening I left the kitchen to change over a load of laundry downstairs, and by the time I came back just minutes later, the screen was black.  I could hear whatever was on, but it was as though I’d developed some sort of selective blindness.  I decided it was a sign.  Out the thing went, and I’ve never replaced it. I’ll never have to watch the Country Music Awards again.  Whew. Tonight the Grammy Awards are on, and I’ll be missing that, too.  It’s just as well.  I don’t listen to contemporary music anyway (by now you’re thinking thank heaven you don’t hang out with me).  Who will win?  People I’ve never heard of, singing shit I couldn’t listen to if tied to my chair.  There.  The suspense is over.  I’ve got an entire evening to get some reading done for a class I’m taking this semester. I’ll cuddle up to a warm Kindle while soup simmers quietly on the stove.  Pour a small glass of red wine.  Break off a morsel of fresh bread.  Dip it gently into the wine.  Watch the warm colors blend.  Savor a primitive pleasure.  It is Sunday, after all. 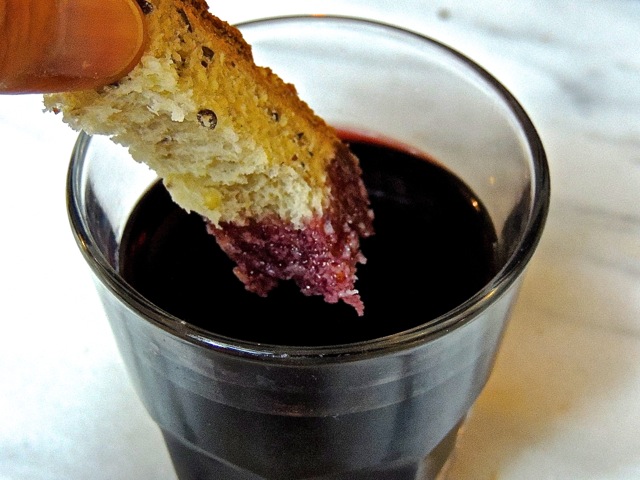