Posted on March 2, 2014 by thesolitarycook

I am so over comfort foods. They’ve been working hard to try to keep me happy since early November. Which was all very well and good in the early months. But five months in, I’m weary of soups and stews.  I’d sooner consume cat food than boeuf bourguignon. I’m sick of sweaters.  I’ve developed a deep dislike of heavy coats and bulky boots.  Ordinarily, I love the thought of, and even long for, a Sunday spent beneath blankets on the couch with a book, a pot of tea, and a cat.  But these are no ordinary times, and I’ve even had my fill of all that.  I’m ready for some discomfort.

I want to hike with the dogs very early in the morning before the rattlesnakes wake up. I want to sit in the Sunday morning shade of my front porch in my pajamas and inhale deeply over that first cup of coffee as the street slowly wakes up. I want to stretch out under my ash trees and lap at a coffee-laden popsicle while reading a book. I want to ride a bike. I want to sweat. 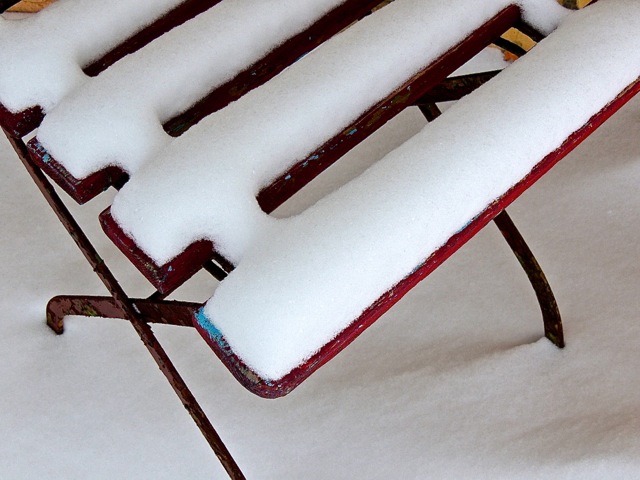 My front porch misses me

Today, though, I worked up a sweat shoveling the latest foot of snow. Again. I probably should have done it yesterday, but the wind was so fierce that trying to move snow anywhere would have been  fruitless. An open patch would have drifted over within minutes. I’ve been feeding the dogs out of mixing bowls in the kitchen for a couple of days because their own were buried beneath a two-foot-deep drift on the back deck. I dug those out today, too. Being fed inside out of strange vessels confuses the dogs terribly. They’re border collies, and changes to their routine cause them to pause, furrowing their brows over an apparent shift of the world’s axis.

It might have been nice to get shoveling out of the way first thing this morning, but I decided to let the temperature move a bit closer to zero. Call me a wimp, but just stepping outside at minus 15 is like being slapped.

So I talked myself into starting yet another pot of soup while waiting.  First, I needed some vegetable stock, a wonderful thing to make because it can be such a movable feast.  We always have onions on hand, right? And those little cloves at the center of a head of garlic? Save them up and toss them into the pot. Carrots (peeled), celery, mushroom stems – or even the whole mushroom if it’s looking a little tired. Put it all in a pot and fill it to cover everything by about three inches with cold water. Cover the pot and bring it to a boil. Remove the lid and reduce the heat to a simmer. Let it bubble gently until reduced by about half.  Set a large bowl in the sink and set a colander in it. Pour the stock into the colander and discard the vegetables. 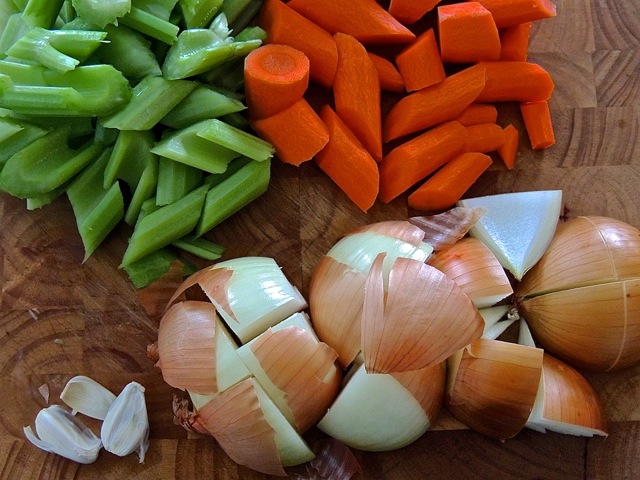 Small cloves of garlic – 3 or so

This soup’s greatest comfort comes from the fact that it pretty much presented itself straight out of the pantry.  Every trip out is a white-knuckled one these days. Streets are so glassy they veritably gleam. It’s like driving on a skating rink. I don’t drive unless I absolutely have to, and today I didn’t.

Clearly, I’m taking some liberties with the rule that tortellini be served in a broth. Strictly speaking, there is broth at play here; but given our never-ending winter, I needed something more substantial. Too, the whole combination just sounded so good. 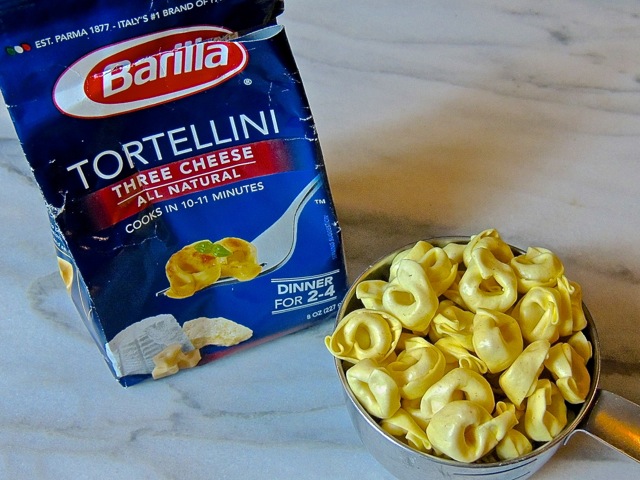 2 teaspoons fresh rosemary, minced (tell me, please, that you keep a plant on your windowsill)

Sea or kosher salt and pepper

1.  Add enough olive oil to a soup pot to cover the bottom.  Warm it over medium heat.

3.  You’re going to grind the dry rice into a powder which is going to lend a subtle, silky body to your soup.  First, clean your coffee grinder by filling it with oatmeal and grinding it until very fine.  Dump the oatmeal and brush out its dust.  Add the rice and grind it to a fine powder.  Brush out the coffee grinder again.  Once the soup has reached a simmer, stir in the rice powder.  Continue cooking the soup for 15 minutes, giving it a stir now and then.

4.  I always have dry tortellini in the pantry.  I love them in salads (after they’ve been cooked, of course); they make a good, fast, late dinner at the end of a long, long day; and obviously, they are wonderful in soups.  Cook them separately; if you try to cook them in the soup, there is a chance they will absorb too much liquid and leave the soup too dense.  Barilla is my favorite brand; they cook up to a silken softness that other brands seem to lack.  At my elevation, they take about 12 minutes in boiling, salted water; when done, drain them through a colander and add them to your soup.  Serve immediately, with some grated Parmesan if you wish. Or not, as you wish.

I set the stock to simmer while I shoveled, and once it was done, the soup itself came together in about 20 minutes. As I was excavating for the dog’s bowls, I heard a familiar chirrup. A beautiful little hairy woodpecker has been frequenting the suet feeder in my back yard this winter, and there he was on this cold, cold day, a bright and cheerful flash of color in a too-white world. 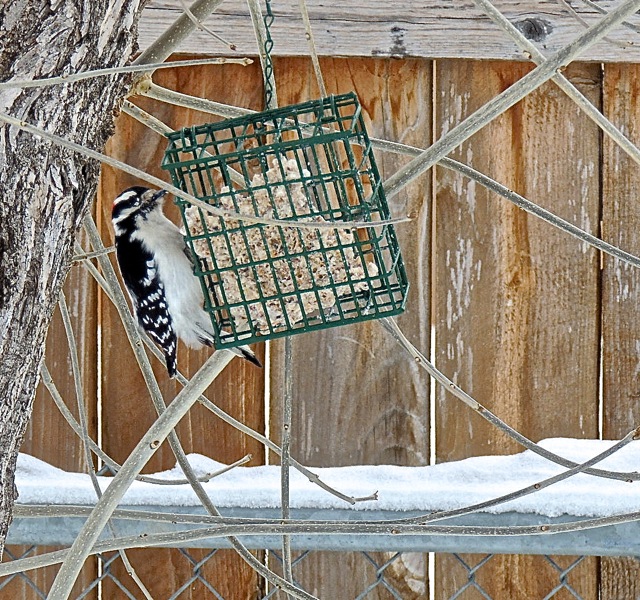 Surely the world will realign to its proper tilt one day soon and a new season will bring new comforts.

I'm a chef, a cook, a teacher, a reader, a writer, a bike-rider, a dog- and cat-woman
View all posts by thesolitarycook →
This entry was posted in Meatless Monday, Pantry Dinners, Pastas, RECIPES, Soups, Vegetarian and tagged fresh rosemary, garbanzo beans, tomatoes, tortellini, vegetable stock. Bookmark the permalink.