Posted on August 10, 2014 by thesolitarycook 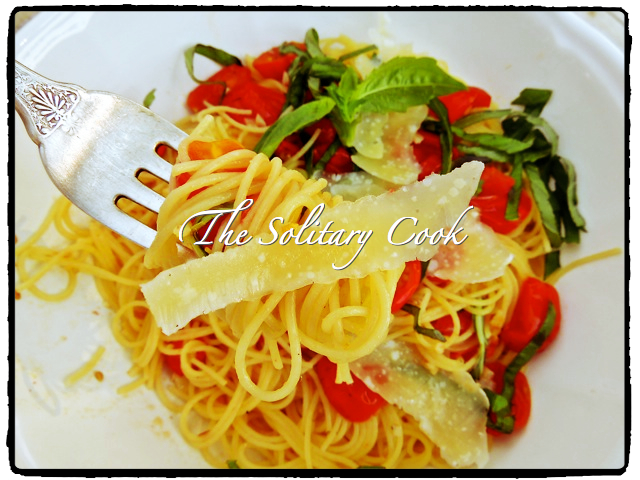 Say that three times fast. That’s about how long this takes to come together.

For the last couple of summers, I get very nostalgic for Italy around this time. The daughter had spent most of the summer at an international dance workshop in Florence. I flew over towards its end to see her final performance and afterwards to travel around Italy and France with her. Lost Shoes Risotto and First Night in Florence Spaghetti were among the offspring of those travels.

When I got home, one of the first things I did was go looking for a large bowl that reminded me of those in which we’d had great, gorgeous salads – everything was in season – and wonderful, simple pastas. It needed to be deeper than a pasta plate, but smaller than a conventional mixing bowl. I had a surprisingly difficult time finding just the right one. I finally found the perfect, classic white bowl at T. J. Maxx. For $3.99. Sold.

And it was made in Italy! It was almost as though I’d brought it home with me.

This simple, Italian-inspired pasta is perfect for a warm summer evening. If you can step outside and pick a couple of handfuls of little tomatoes, snip some deep green leaves from a basil plant, lucky you.

As for the pasta, typically, a flat pasta would be used here, but I use angel hair because oh mio dio, it’s hot. Angel hair cooks so fast that very little time is spent generating any more heat than absolutely necessary.

Have all your ingredients prepared, as everything comes together very quickly.

Serves 2, or 1 with luscious leftovers

Extra-virgin olive oil – be generous: a good 2 to 3 ounces

Sea or kosher salt and grinds of pepper 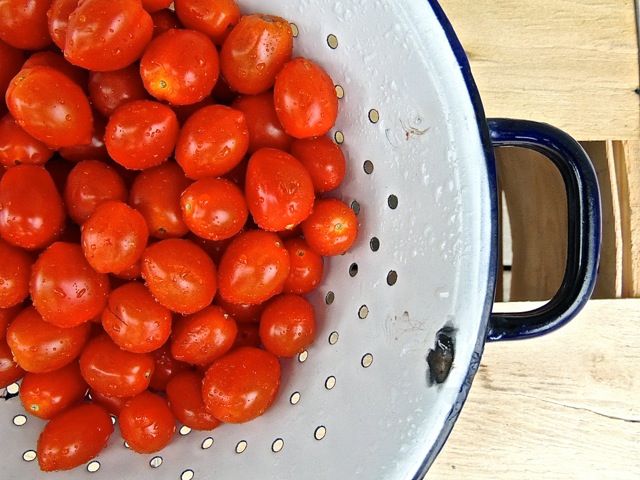 After you’ve rinsed the tomatoes, cut them in half from top to bottom. They’ll cook faster this way. 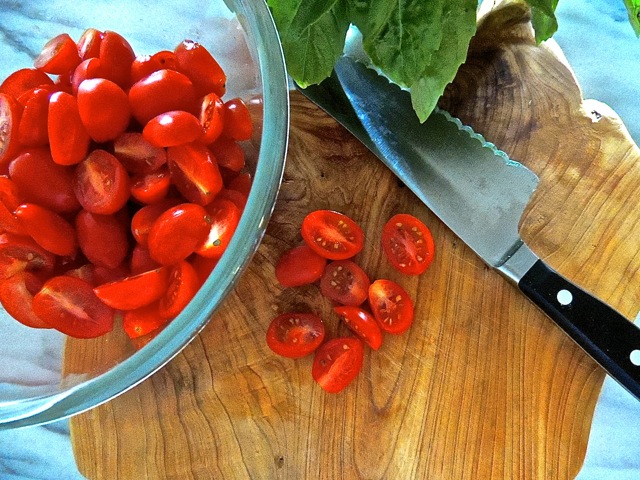 Yes, I know the trick of sandwiching the tomatoes between two plastic lids, then carefully running a knife through the center. The problem is that no two come out the same thickness. Some at best have a sliver shaved off one side. So I halve mine the old-fashioned way. A kind friend gave me a tomato knife which slices through them as if through butter. It is shockingly sharp, which forces me to slow down, creating a sort of meditation on tiny tomatoes.

Mmm hmmm, that’s a flat-bottomed rock that I use for smashing garlic. It’s also vaguely foot-shaped, but that’s a story for another time

Smash and peel the garlic cloves, then mince them well. 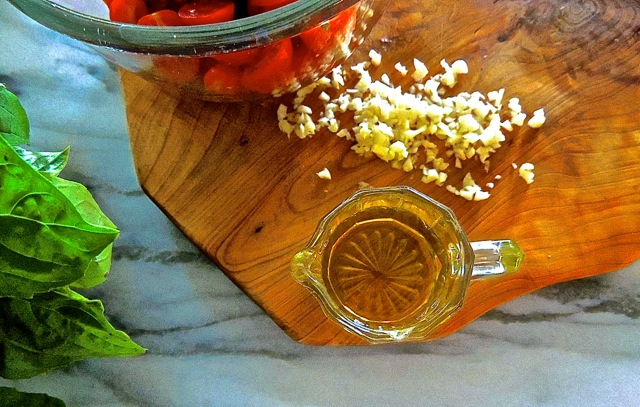 Chiffonade (French for “ribbon”) a few leaves of fresh basil. As much as you like. 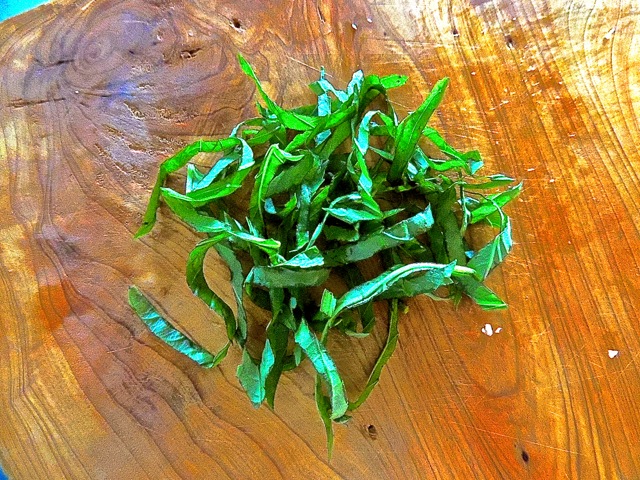 Bring a pot of salted water to a boil. Read about how much water and how much salt here.  Add about half of the package of angel hair. Set a timer for 4 minutes. 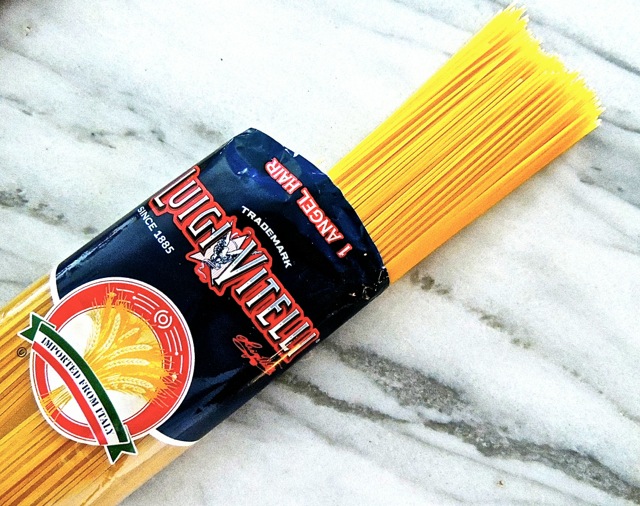 Over medium heat, warm a skillet large enough to hold both the sauce and the pasta. Add the olive oil. When it shimmers, or “ribbons,” add the garlic. Cook it gently until it is nicely fragrant. 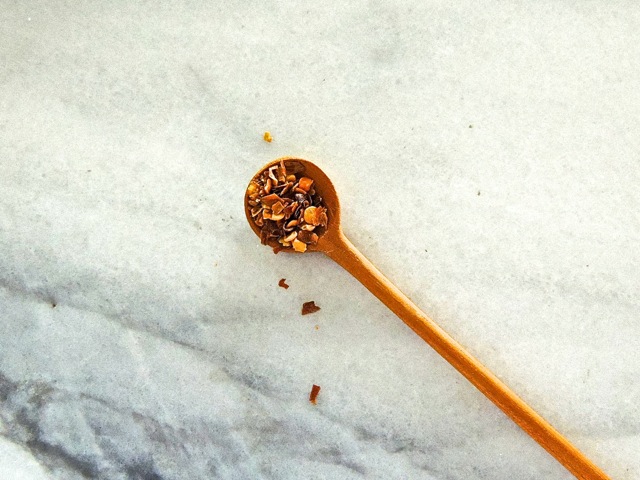 About a half teaspoon

If the pan is spattery, reduce the heat a bit. The tomatoes want to cook very gently.  When the pasta is almost done, season the sauce to taste with salt and pepper.

When the timer sounds, use tongs to transfer the pasta to the skillet. Add a ladle of the pasta cooking water. Carefully toss everything together with the tongs, and let the pasta cook for a minute more.

Lift the pasta into bowls, and spoon the sauce over it.  Garnish with some strands of beautiful basil and some shavings of Parmesan.

Pour a glass of chilled Italian rosé. Twirl some pasta on a fork. What does the scene you’ve set conjure up for you?

Personally, I’m imagining sitting in a little trattoria in the daughter’s San Niccolò neighborhood, which graces the right bank of the languid, sultry Arno. The heat of the day is yielding to evening’s cooling touch. And I’m clinking glasses with the beautiful, graceful young woman whose mother I am so proud to be.

I'm a chef, a cook, a teacher, a reader, a writer, a bike-rider, a dog- and cat-woman
View all posts by thesolitarycook →
This entry was posted in Entrées, Meatless Monday, Pantry Dinners, Pastas, RECIPES, Vegetarian, WEEKNIGHT DINNER and tagged memories of Florence, simple Italian pasta, trattoria dinner. Bookmark the permalink.